I have been thinking of switching up this blog for a long time now. It's always been a bit of a mishmash and since I rarely blog about writing anymore (even though I still am a writer and editor), I wanted a place more solely devoted to art, mail art, correspondence, and most of the things that this blog has become lately. Perhaps it's a bit of my "coming out" as an artist, actually giving myself permission to say the word, that led me to finally create this new blog. I've also been writing here since 2006 and, frankly, the platform is getting a bit dated and I can't do all that I'd like to. So, if you are one of my handful of followers, I hope you'll check out Adrienne Mason Art and perhaps even hang out with me over there, as I explore art (collage in particular), mail art, letter writing, postal history, the making of little accordion books, and more.

This blog isn't going anywhere, and there is still lots to look through, but it likely won't be updated all that often. Thanks for reading!


Posted by Adrienne Mason at 2:50 PM No comments:

After such a good streak, that was a long time to leave the blog. I have been thinking of it--and getting to my art table on occasion--but I've been preoccupied by this. Art making and correspondence has slowed down in the last few months, but I'm managing to chip away at things. So if I owe you a letter, it's coming. Truly. Here are a few things that have been passing through, either in or out.


Below are a few new collage cards that have been whisking their way to various parts of the globe. Just playing around. 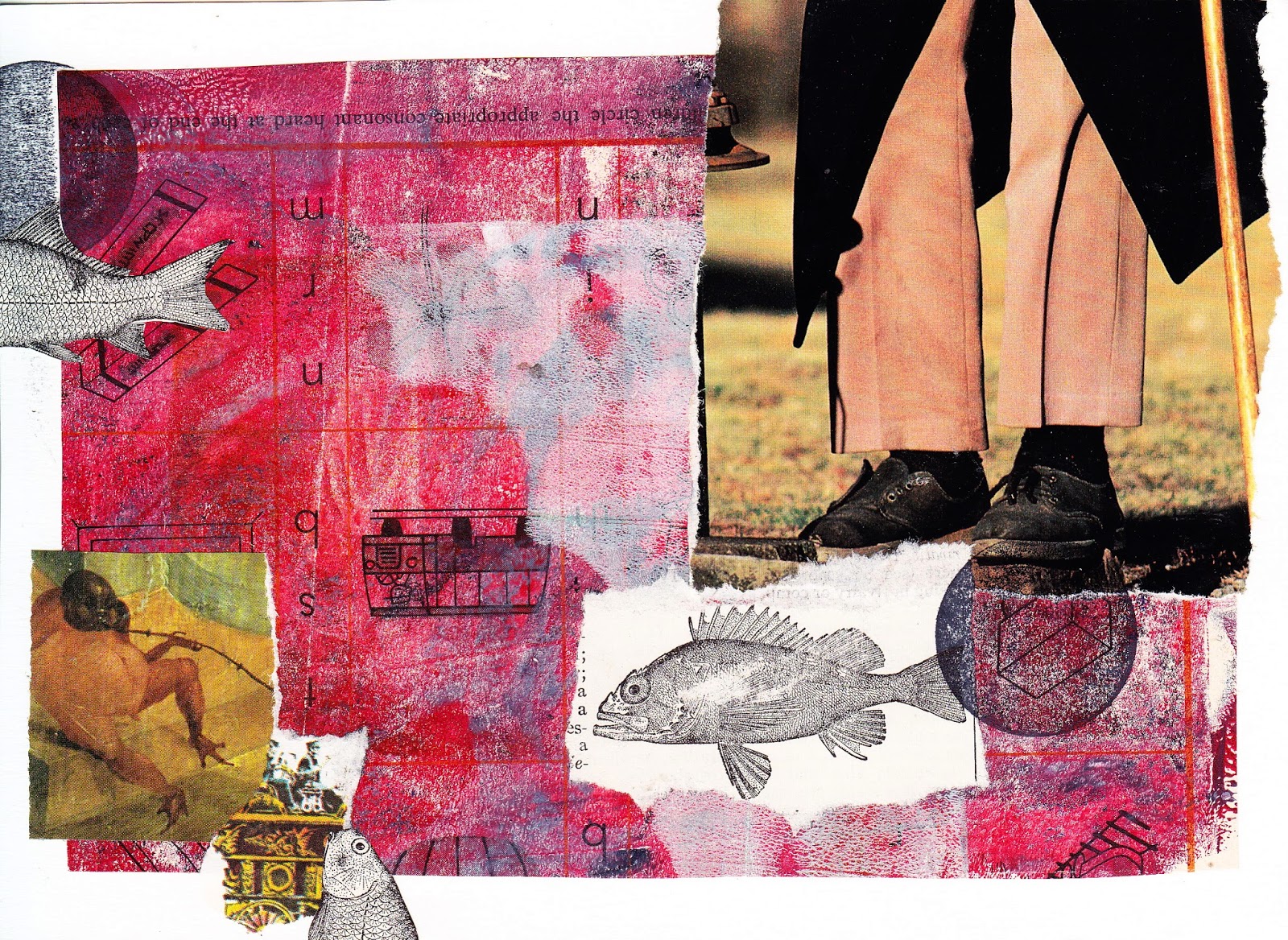 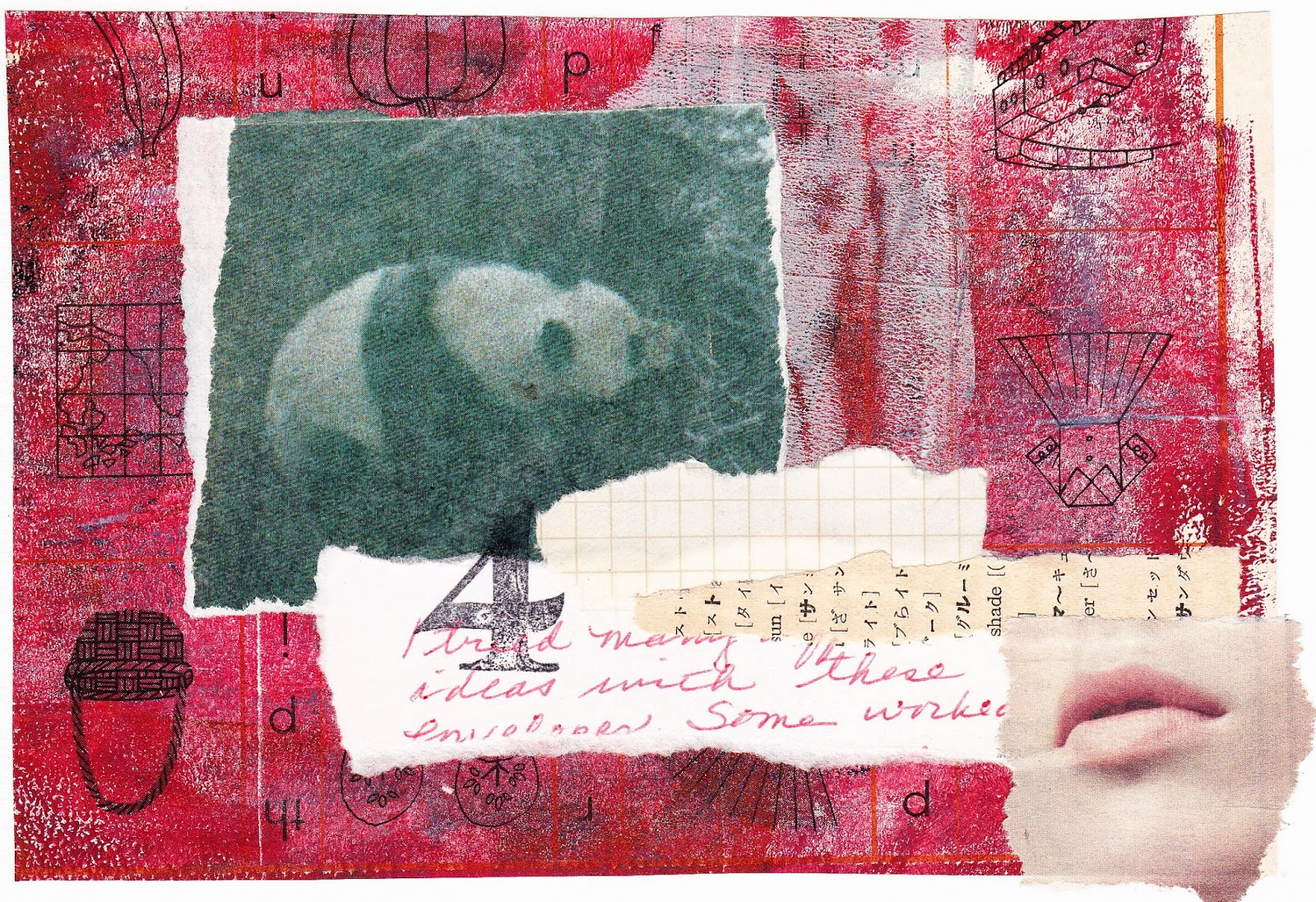 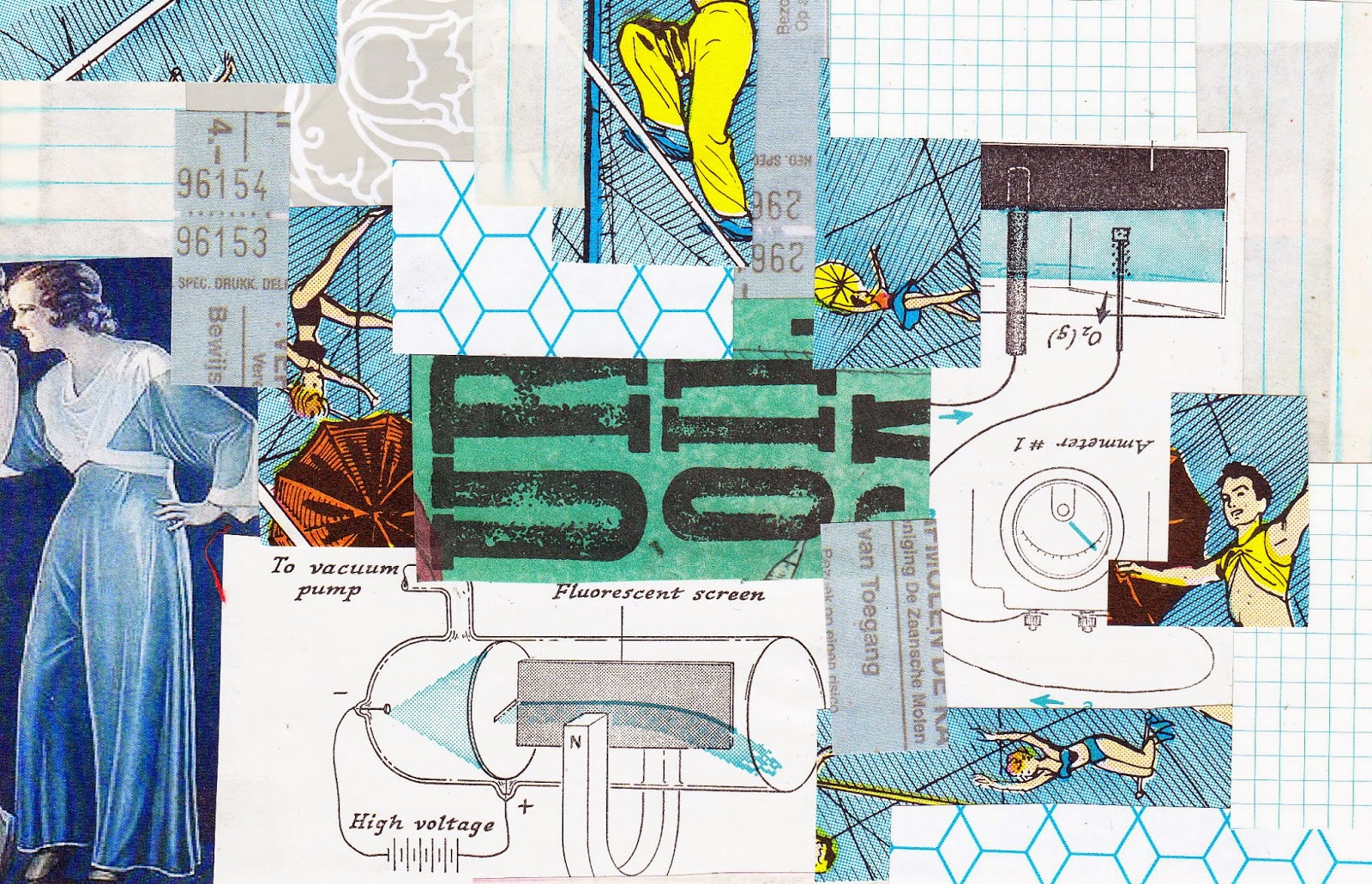 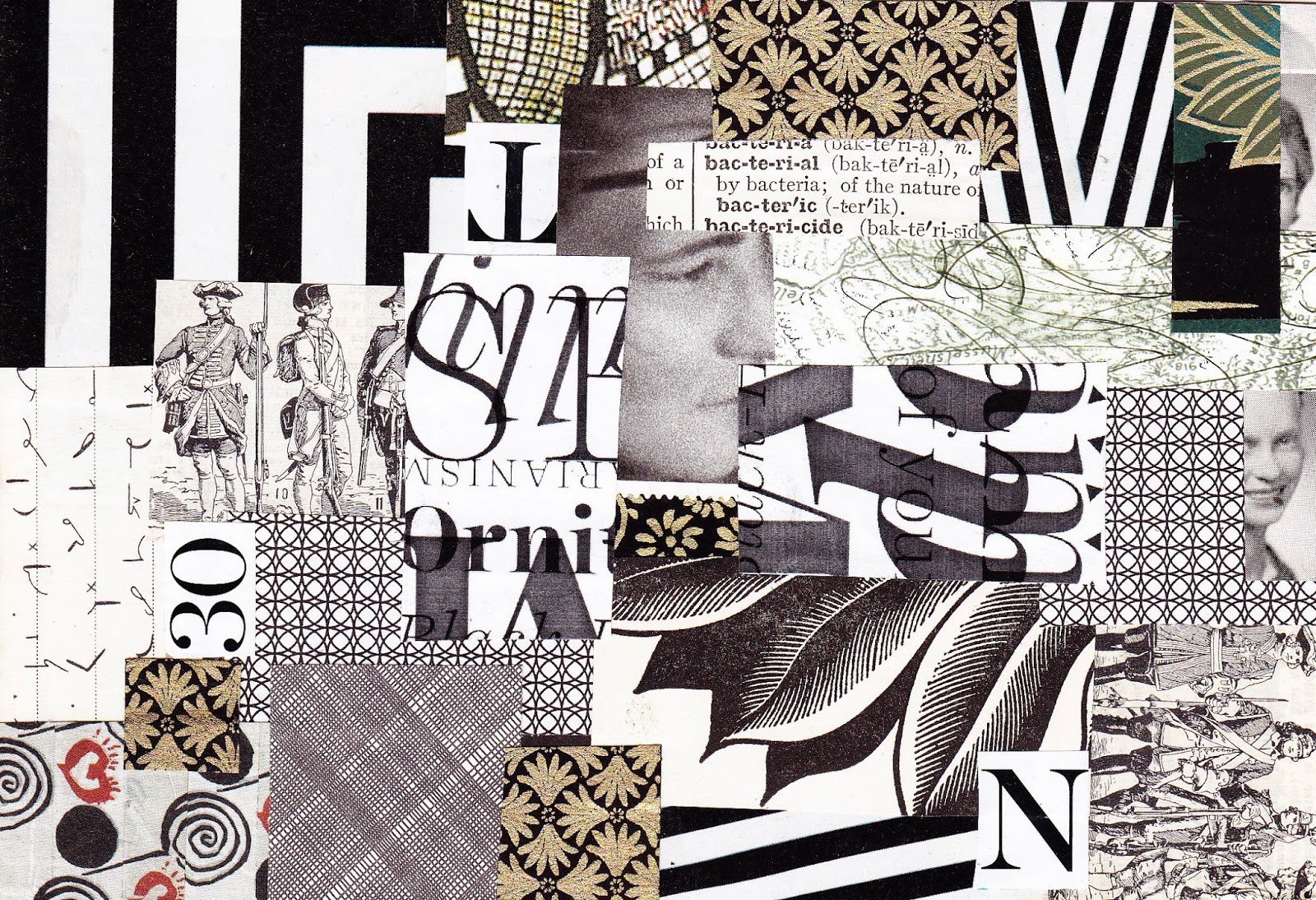 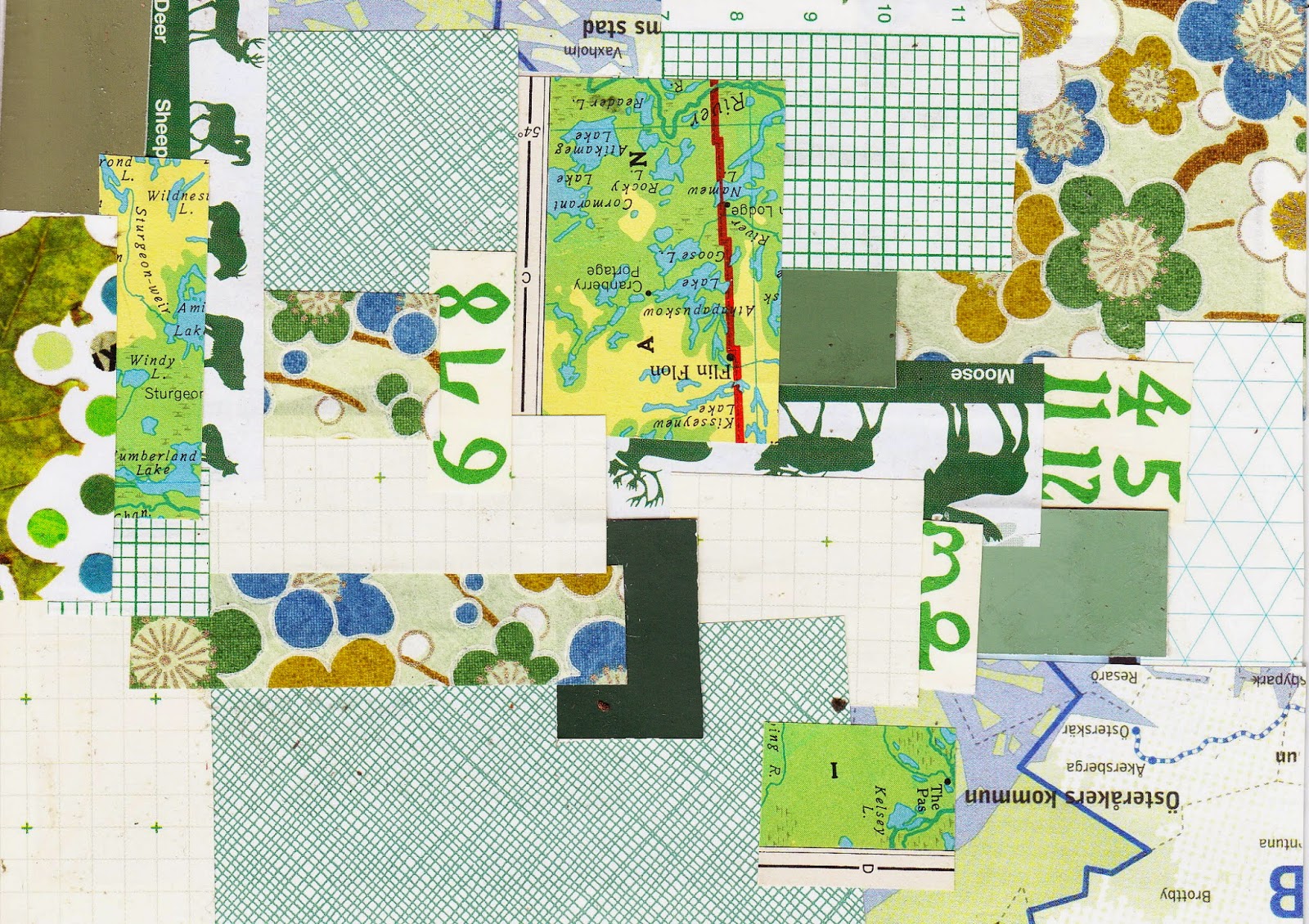 Found some time this weekend for some art making and letter/card writing. Here are a few of the results: 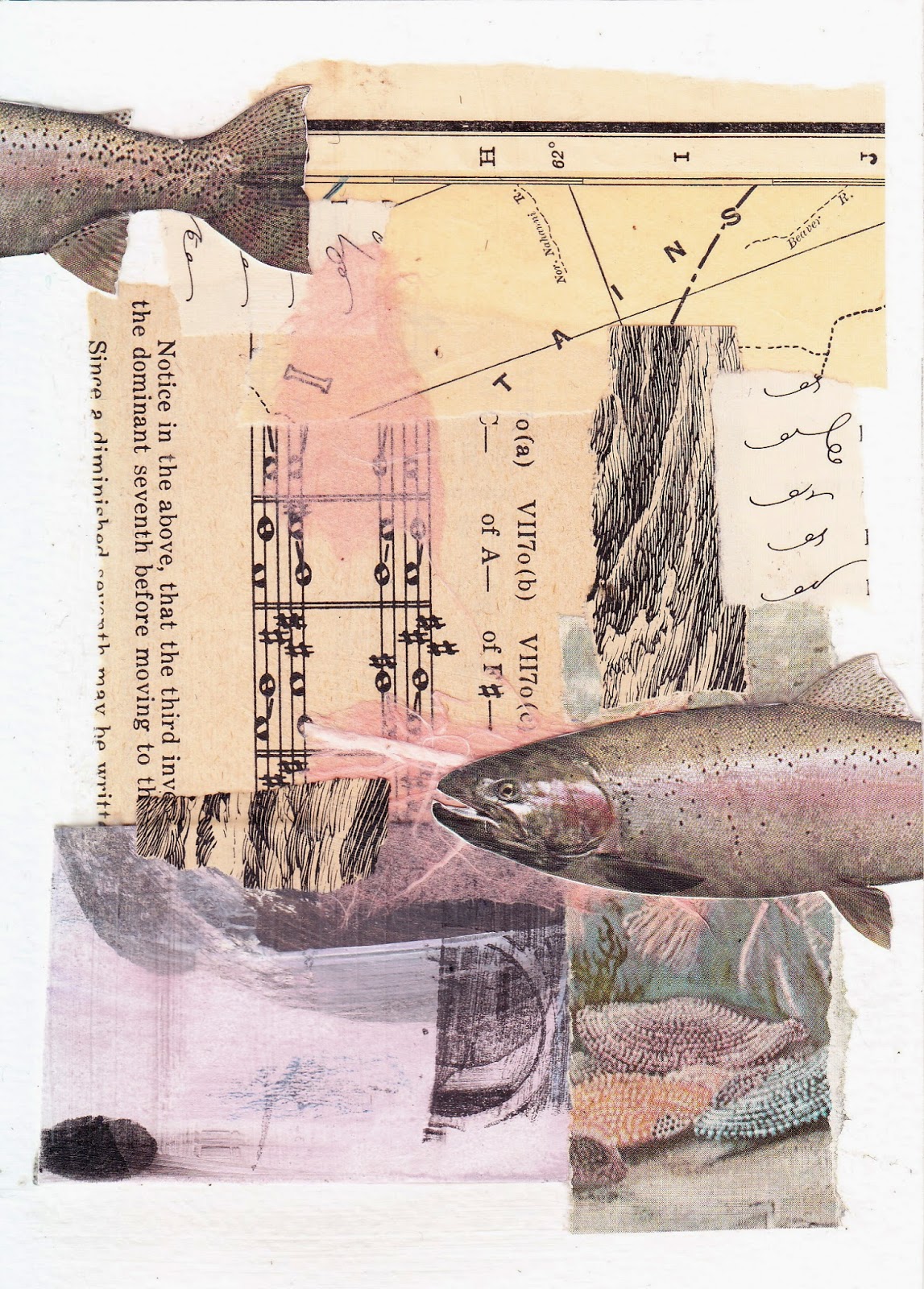 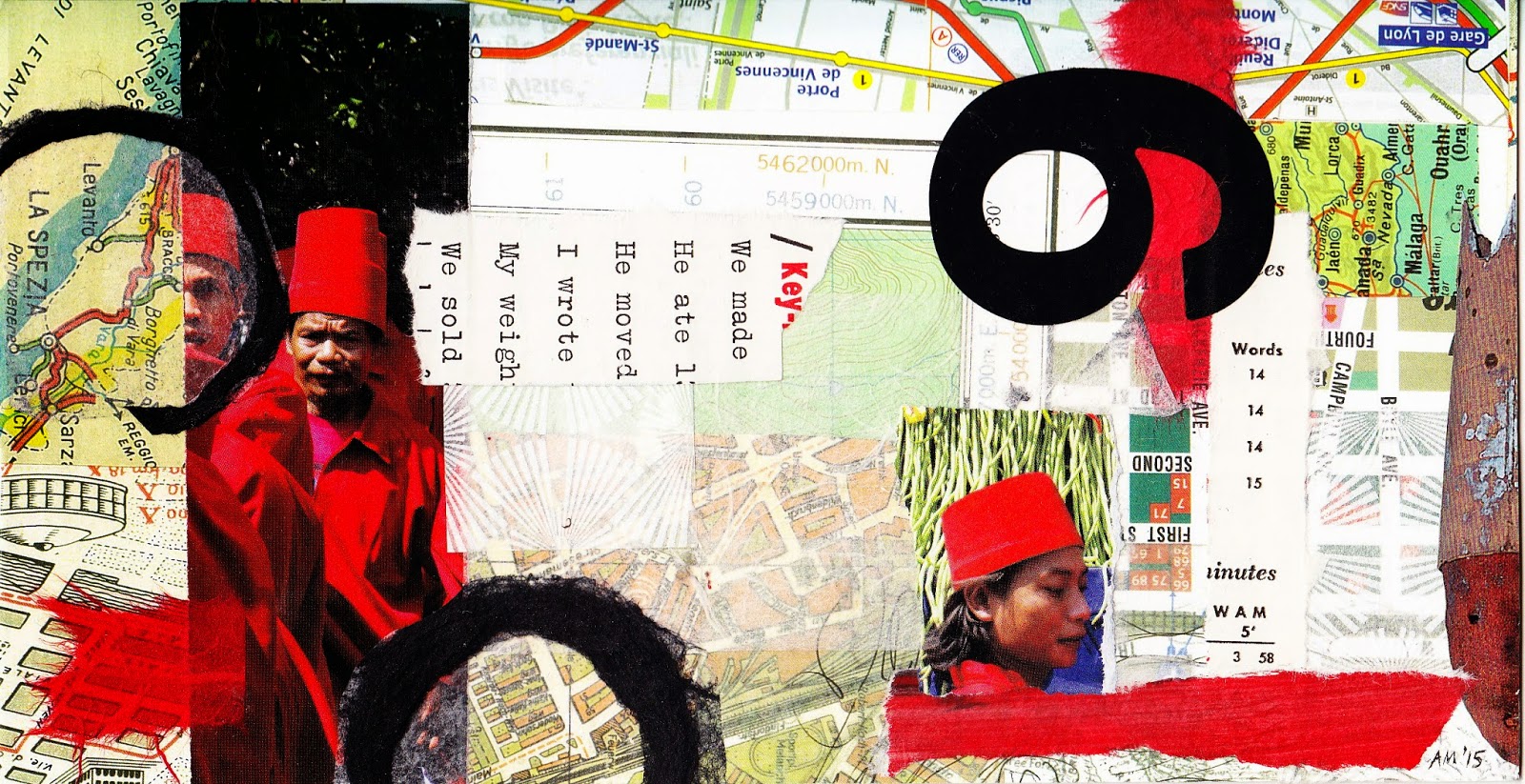 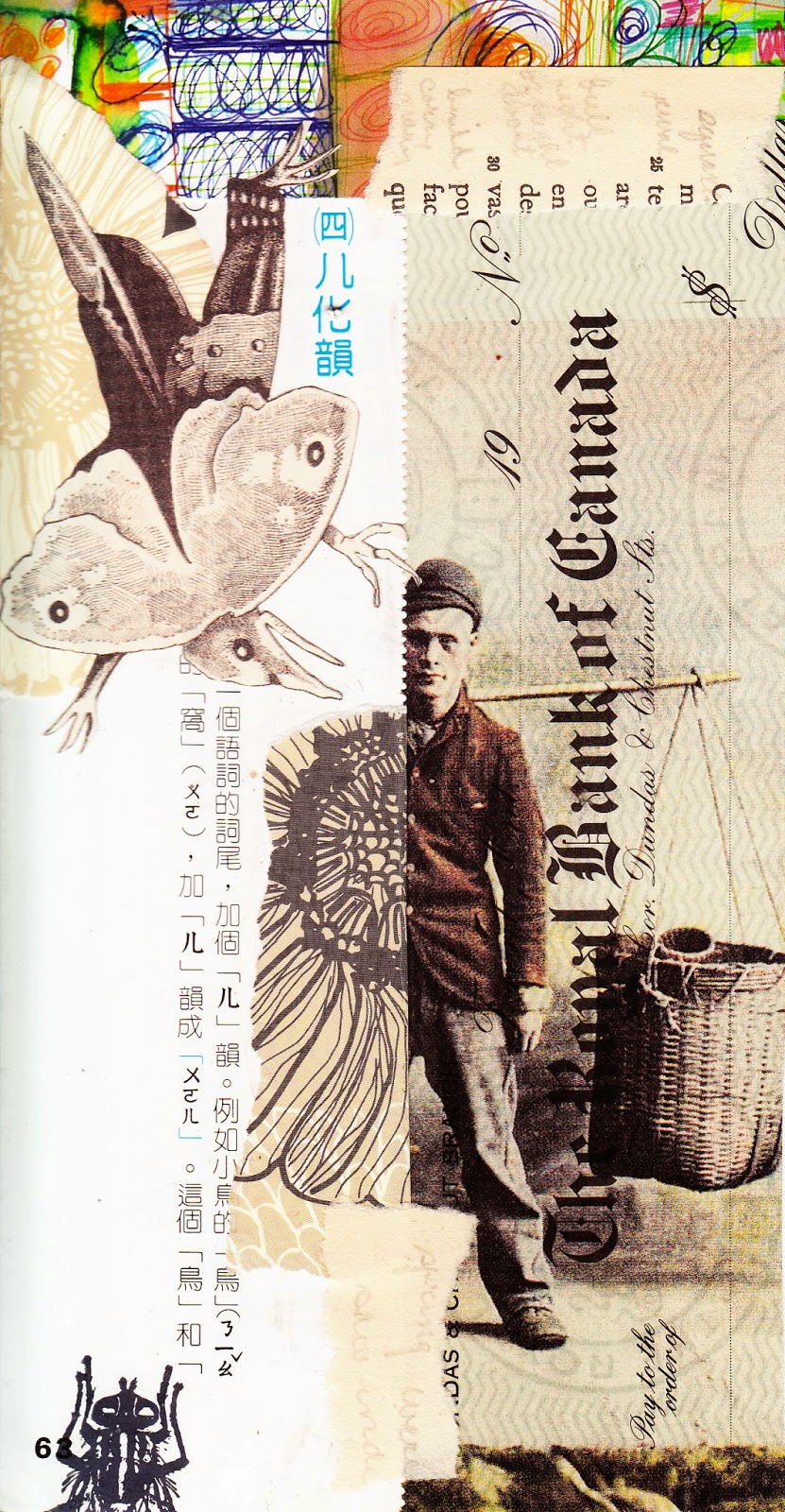 Posted by Adrienne Mason at 7:30 AM 7 comments:

Yes,  I'm still here. Some personal things in the great adventure called life have slowed me down a bit; I won't bog you down with details. I've found collaging my way through it all very therapeutic. When I spend time collaging I try not to over think what I do. It's a meditative, perhaps intuitive?, process for me. I just move things around until the composition feels right and then I get the glue stick out. Nick Bantock talks about composition in The Trickster's Hat (one of my favourites and I'm currently working through a few exercises): "Composition is really hard to teach, mainly because balance is innate. Yes, there are mathematical rules  of harmony and the golden mean can be measured, but the real acid test is not geometrics - it's purely a matter of whether you can feel the rightness of something in relationship to its surroundings. Do you internally "know" when something is right or when it is just off?"

If you are waiting for mail from me, I'm back in the saddle and hope to be caught up soon. Thanks for your patience. And I'm drowning a bit in small collages; I may give some away…stay tuned.

In the meantime, here are a few new works.

Posted by Adrienne Mason at 8:38 AM 3 comments:

The Gift of a Letter

This morning I was up early, so I took the time to write a long letter to a new friend in Germany. I don't know her well, but she took a great deal of time over the last month or so to write to me a few times. I was happy to return a letter and carry on the conversation.

Over the past year, this blog has evolved a bit to one that was primarily focused on writing to one that explores art (mostly my own fledgling attempts) as well as correspondence and mail art, something which I have grown to enjoy more and more with each connection. The mail I receive is a gift of someone's time and time is something we seem to have less to give. Apropos of this sentiment and this seasoning of giving, here is a video courtesy of WestJet. I've heard of Mr. Farrer's letter project over the past year, but this video presents the story -- and the value of a letter -- beautifully. It's sentimental, yes, but I do think it demonstrates the value of a simple act and of caring.

I wish you all the best for the holidays and beyond. As my met-via-the-mail friend Pamela often writes, "See you in the mail."
Posted by Adrienne Mason at 7:12 AM 3 comments:

Busy, but very rewarding, days here as I settle into a new job and splitting my time between two places, both filled with people I love and things I enjoy doing. Life is full and very good, but my posts will likely slow down a bit. I'm trying to catch up with correspondence as well, so if I owe you a letter, it's coming! Promise. For now, a few collages I've been working on -- I've tried layering and collaging on top of some of my mono print efforts. I like the effect in the yellow one in particular, but I think I could have dropped the little armadillo-like creature in the red one; it seems a bit stuck in. (I would love some feedback from any readers, particularly constructive criticism. For the most part I work in a bit of a creative vacuum.) I don't think these are finished, but I'll keep staring at them for awhile. 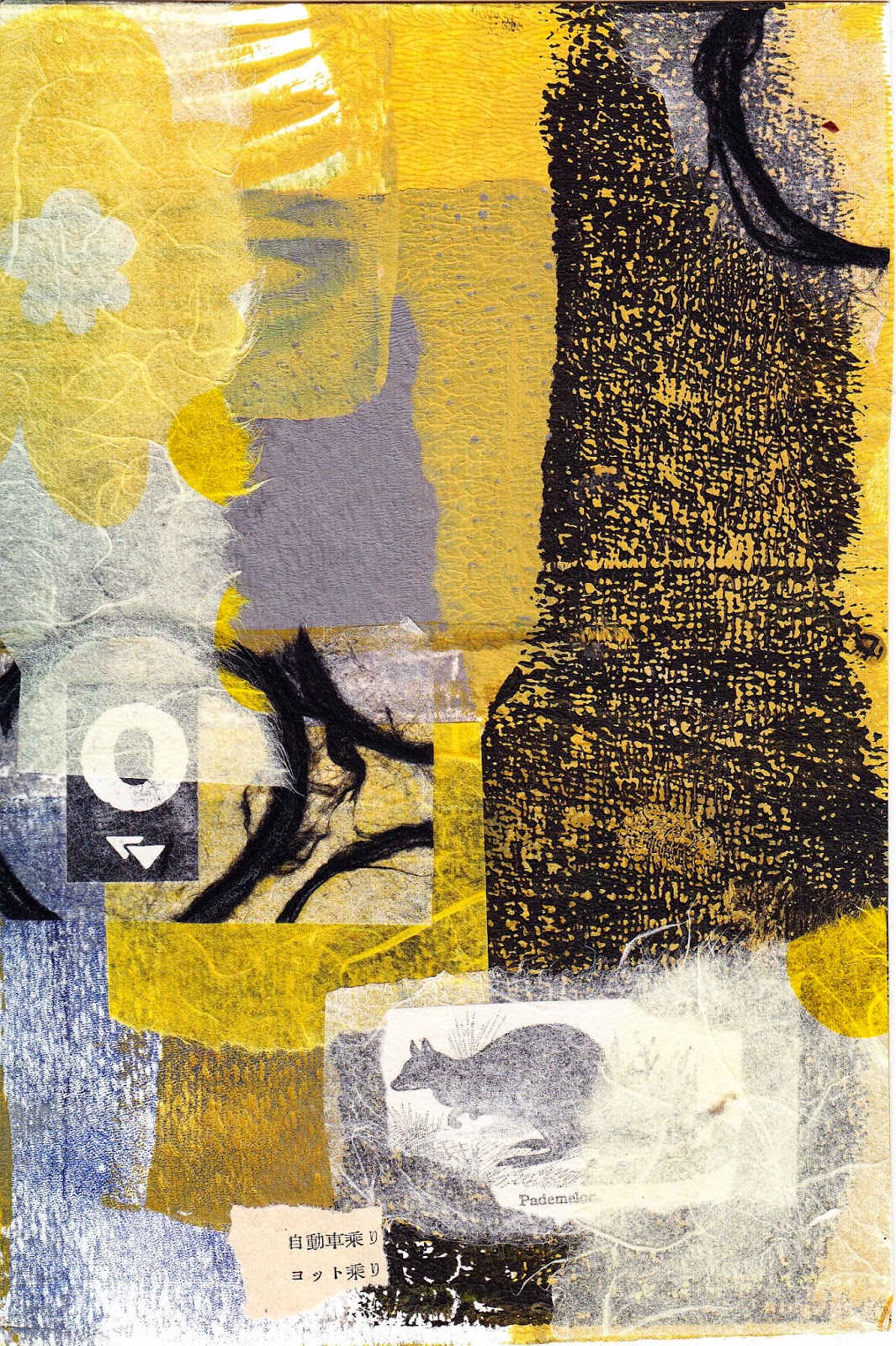 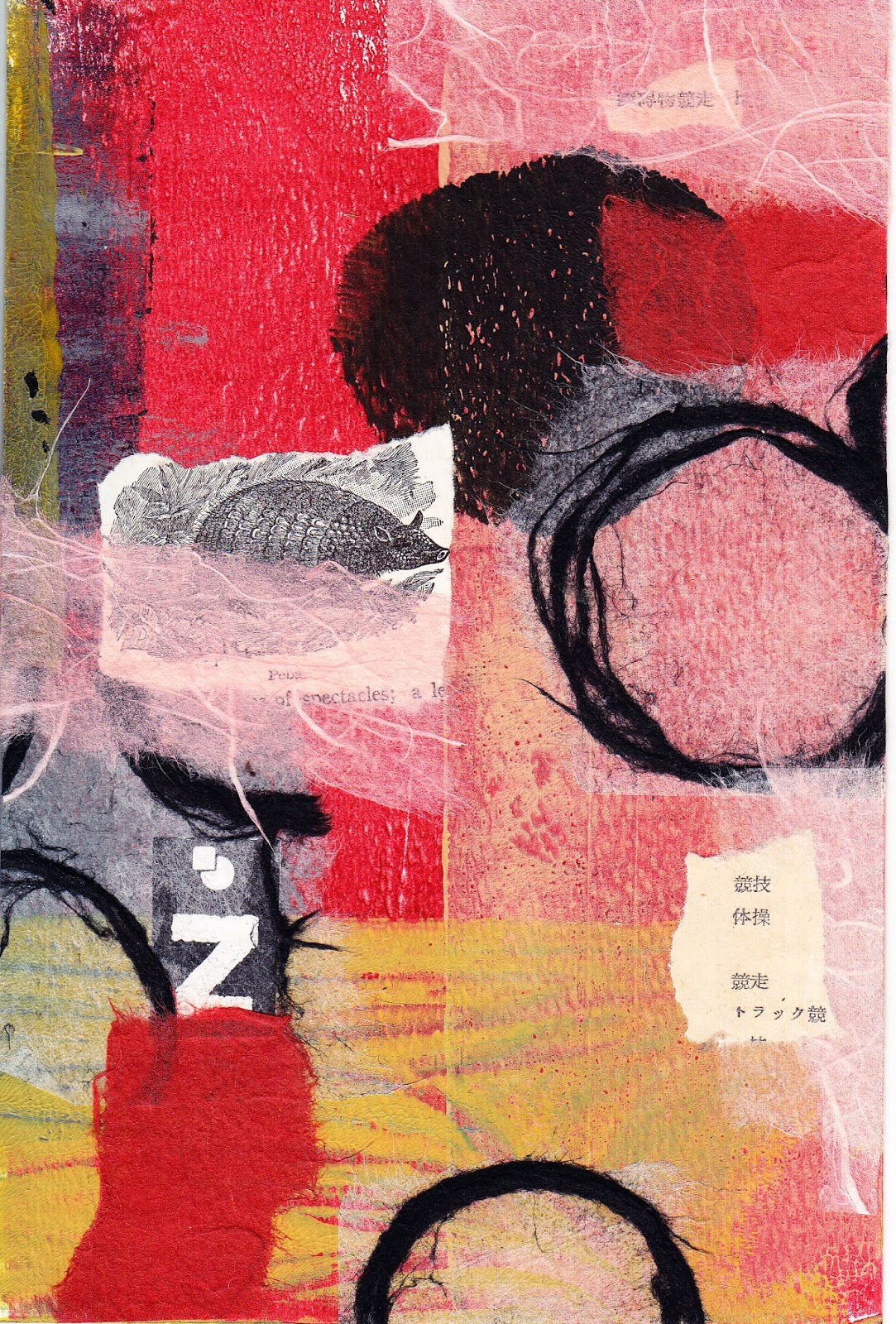 There are several benefits to spending time in the city. One is re-connecting with old friends -- actually having time to spend with them -- and taking part in the many arts event in the city. This weekend I went to two books launches, both of friends. Jude Isabella, my work partner in crime, released Salmon: A Scientific Memoir, on Friday. And my friend Margaret Horsfield, along with Ian Kennedy, did a signing and presentation on Tofino & Clayoquot Sound: A History, a book that the region has long needed, yesterday. I'm so proud of you, my friends. I know how much angst and sleepless nights go into writing projects so it's great to have them out there, released into the world.

And I also received another book from a dear writer friend. So happy to have I Wasn't Always Like This, a book of essays, by Shelley Leedahl, on my bed stand. (The collagist in me loves the cover of that one.) All is good surrounded by so much creativity.

Posted by Adrienne Mason at 9:56 AM 6 comments: 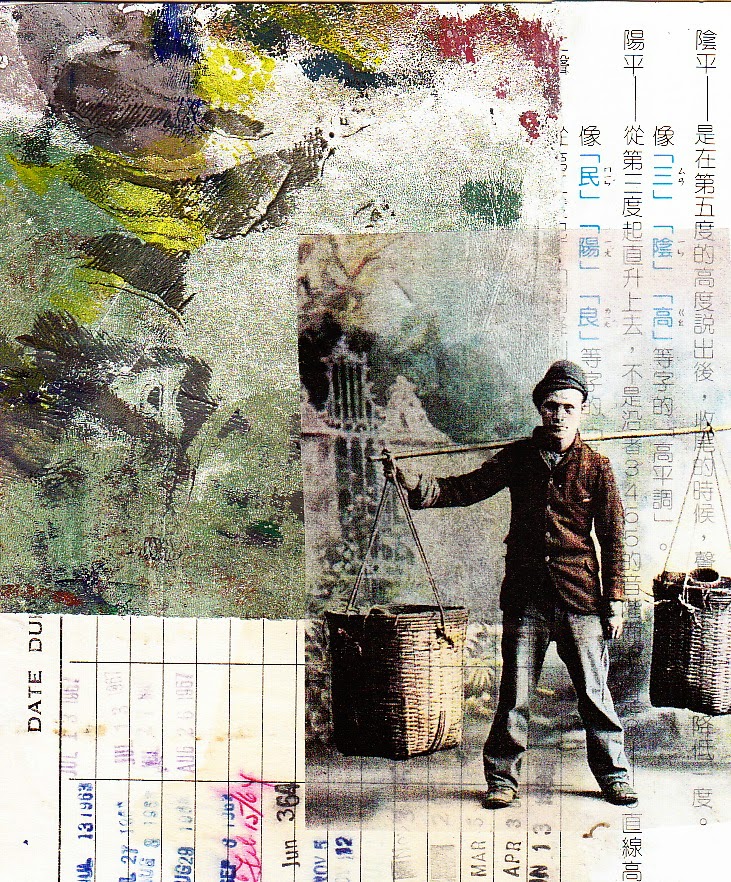 As I mentioned previously, I've got lots going on at the moment - new job, new home (for part of the time), new city, etc. and, to add to the mix, I started an on-line collage course last month. Not entirely sure what I was thinking, but being busy does make one efficient! The 8-week course is The Art of Collage with artist Randel Plowman, he of A Collage a Day and one of my favourite collage books, The Collage Workbook. It's been great for keeping the work going and not trying to over think things too much. Each week is a new exercise, a new approach, a new technique. It's been great and I really recommend it, especially if you are just getting going with collage. (These classes are also great for meeting other artists and connecting with people from different parts of the world.)

Posted by Adrienne Mason at 8:32 AM 5 comments:

Adrienne Mason
I'm a writer and editor from Tofino (aka Tough City, thus Tough City Writer). When I first started this blog, it was to focus on books, writing, reading, occasionally my own writing, and other subjects of questionable worth. Now, I'm expanding the scope - art, life, food, travel - whatever inspires me to get my fingers on the keyboard. For posts more specific to Tofino, check out my other blog, The Heart of Tofino, www.theheartoftofino.com. For more about my work, see www.adriennemason.com.